I’m Pitting two very different knives against each other. One is a fixed blade with sheath. The other a folding knife/plier combo.

First, the Gerber Crucial. This is a folding knife and contains a blade with a blunted tip with scalloped serrations. There are two screwdriver heads, a mini crab style clip and a pair of pliers with several gripping surfaces including wire cutters.

The clip opening is reversed, which cleverly allows you to open your bottles with it.

I’ve had this knife for a good 6 months or so and it’s been walking, camping, used in the car and house. The knife has retained it’s edge and the tools have all worked well. They lock positively in place with a liner style lock, easily used one handed for the blade. The posi drive screwdriver is a little odd as it is narrowed, but works well, even on larger screws. The flat blade is large and feels indestructible but was difficult to open on my sample.

The pliers grip particularly well and the wire cutters have worked well, but did struggle slightly with multi-strand wires.

It feels substantial, heavy even. But put it on the scales and it tips in around 140g which is similar to other brand’s take on this style of knife. 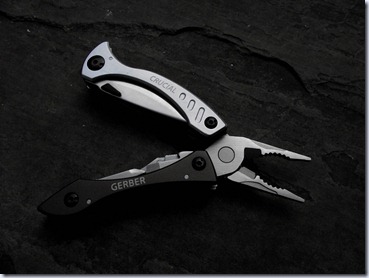 The Fiskars K40 is a completely different beast. It’s a fixed blade, with No serrations, tools or gadgets. But this means that it can concentrate on being just one thing. Being sharp. 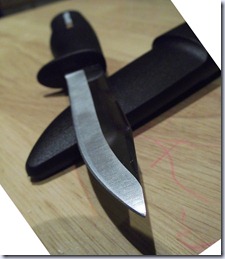 I have to say I was weary of this knife at first as the handle is the hollow type that Fiskars tend to favour. I’ve tried to wreck it (through use – I haven’t run over it or blown it up) and it faired well. It retained its edge well and the 10cm blade is still seated solidly

What is the K40’s coupe de grace to make you consider it for your pack?.. It weighs a surprisingly svelte 70g.

I already own a knife similar to this, a high carbon steel knife which is also excellent but requires more care, due to the type of steel it’s made from. The Fiskars knife uses Stainless steel, so it’s easier to look after, making this a better choice for beginners, infrequent users or anyone camping on the coast.

Which knife would I use?

For wild camping the K40 has the ‘edge’ (ho ho!) due to it’s light weight and a fixed blade can be used more confidently. Maybe you suddenly feel the need to carve a spoon, or make a pan stand. This knife can do this for you. The extra weight of the Crucial does give the advantage of pliers to grip a pan, but a decent pair of plastic pan grips weigh less, and grip more firmly. For wild camping, the driver heads and bottle opener/clip are essentially dead weight in your pack

If I was car camping, I’d simply take both.

If I owned a caravan or were simply walking I would take the crucial. The built in tools would come into their own and this would be a handy piece of kit that looks and is much less threatening than the K40.