Wentworth Woodhouse. A place to visit.. :)

Today I've been round a house In Rotherham. Please forgive me if I over-indulge in adjectives.. ;)

It's on one of my favorite local ambles, from where my parents live, to a couple of pubs in wentworth.

I was quite lucky, as I got to go in this house when I was at junior school..

For an idea of scale, It's twice the size of Buckingham palace.. And for those who don't believe there's any culture "oop noorth", you need to come see this. 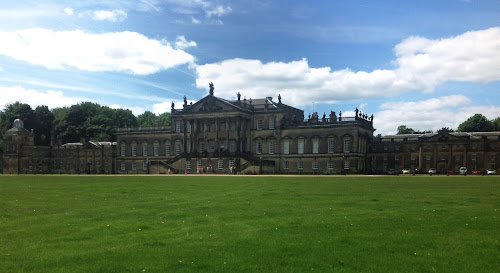 There have been a few houses (and once a castle) on these grounds and the house as it stands has organically grown from one, to the next. The current main building dates to the eighteenth century and is HUGE. It's had a hard time for most of its history.

The first early Strafford - who was responsible for the north of England, was beheaded for treason in 1641. The second earl - well that's where it gets a bit more interesting.. He was prime minister. Not once, but twice.

He was Prime minister while the American war of independence was in full swing. In fact, some of the decisions on how things were settled, were taken under this very roof. That's quite a big chunk of history to take in, for something so far from London...

By the way, The second earl quit, under mysterious circumstances before his term ended... He obviously didn't agree with how things had been handled.

But... Then went back, and this time his headache was 'the troubles in Ireland'. He set things in motion that would have made things a lot more.... Amicable between our two neighbouring countries.

Sadly, he contracted influenza and died a few months in. Other ministers then pushed their own agenda's and got their own way... Things have bad for a long time between our nations. It's a shame he didn't get to see his policies through.

More recently, the house was used by military intelligence, it was a coal mine (which was devastating to the area AND still threatens the building to this day) and a girls collage.. In fact, this ended in the 80's, so this was probably how my school got permission to go round it so long ago.

As I went round, the house is.. Well.. Lets say; water damaged (or at least damp), and this, along with subsidence, has definately been a big feature in this house over the last few decades. Most ceilings are peeling and there are signs of neglect (and one area of over cleaning - ask your guide ;) ).

But there is hope. Room after room we went in was slowly being restored. The guide stated that they aim to have the house unrecognisable within five years, and the main centre part back to its former glory in the next decade. I hope this is true, because its a truly beautiful building. The main entrance with its marble floor and mezzanine is breathtaking.

There are a few quirks from its former use. There are rails around the main entrance, so it could be used for badminton and the old headmasters office has a depiction of the five senses, painted around the walls.. But, also has steam damage where the kettle the head used steamed away part of the priceless wall paintings!

We were led into another room, which was completely naked. Not as in we were naked, but that the panelling had been taken right back to bare wood.

But there are still real treasures here.

On one wall there is a fine painting of a horse, perhaps 12 feet high. This horse won so much money for one of the earls (a long time ago), that it paid for a stable block.

A square stable block, around a central courtyard and fountain, that could house eighty four horses.

That's a lot of hay.. and, knowing a few horsey lady's.. A mountain of shit.

In a stairwell, there's a statue of Ceres (holding what I thought was an artichoke.. Though, I could be wrong!). She was found in Herculaneum (a place that suffered like Pompeii) and its... two thousand years old..

There's wallpaper, printed in the 1830's.. When around here, to be honest, people were happy to have walls, let alone paper on them....

Then, there are the gardens. These are also, like the house... Ample.

At the top of a rise, there is a large stone goblet, called the 'punch bowl'. This was lit like the Olympic flame for special occasions (though historians apparently still argue if it was lit with oil, or with gas). 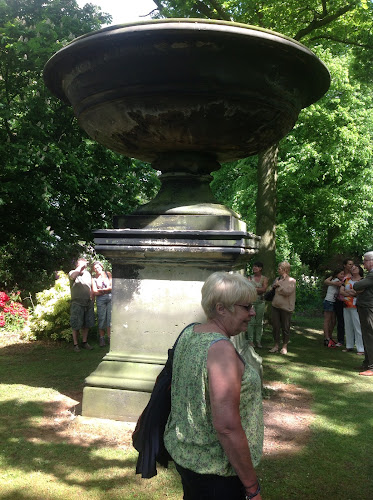 To be honest, by this time, I was happy to be out of the house and into the gardens.. I had the strongest urge to take off my shoes and socks and do this bit barefoot.. The sun was streaming and the views from the terrace went on for miles. And miles.

The woods themselves were alive with hundreds of different plants, obviously landscaped in times past - but now a strange sort of beautiful. Few of the plants were native, but they had naturalised..it was as if 'bloody stupid Johnson' had been let loose to create a mad, world-inclusive woodland (read Terry Pratchett if you don't know who he is, you won't regret it ;) )

It was a great day out, and please, support them. Yes, it's a local thing for me.. But it's an increadbly beautiful house.. Yes,Ii paid.. and plan to again. Go, see it for yourself. I've missed loads of stuff out, so you can still learn, and see.. It's worth every penny. 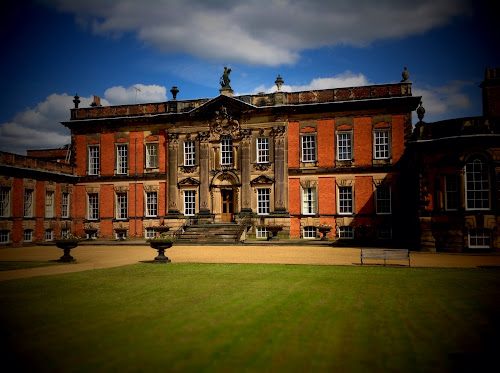 The tours (prices as from when we booked in march) run from £10 for a short tour of the main block, £15 for the main tour of the house and £25 for house and gardens.

Although I'm all for saving money, if you're coming in the summer, go all out.. You don't want to miss the gardens and terrace.

They are also running several things this year.. Check out their website www.wentworthwoodhouse.co.uk for more.

And.. When you finish, there is the village of wentworth round the corner, about a mile from the house. There's two cracking pubs, the 'Rockingham Arms' and the 'George and the Dragon'. Both have real ales, both have log fires in the winter. Highly recommended..

If you have children, Wentworth garden centre is round the corner.. It has a petting zoo, cafe, playground and craft shops. There's nothing to stop you walking down the road and seeing the front of the building, even if you aren't going in.. It's worth it.

(Btw, Both pubs have good beer gardens, though the George also has a playground)...

I'll see you at the bar sometime!