Phew! What a title.. Bringing us to a a new piece of kit  I've been given to review, A knife made by Gerber.. The knife Mr Grylls thinks we need.

I’m very wary of kit that has a star’s name stamped on it. More often than not, It’s an excuse to ramp up the price and drop the quality. But bear with me on this piece of kit – it caught me by surprise. 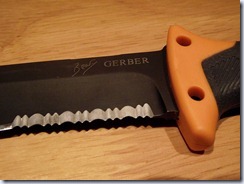 First let’s get, what is for me, the biggest shortcoming out of the way.. Yes. It is serrated… I’m not normally keen on serrations, because they either can’t be sharpened, or are really difficult to sharpen. There is a good reason for them on this blade though. It makes the knife easier to use on a wider range of materials (If you’ve ever tried to slice bread with a fine edged kitchen knife, you’ll know what I’m talking about).

It feels right, in the hand. Balanced, with a full tang. In photos it does look a bit full on – a bit of a GI Joe, Rambo knife. In your hand it becomes the right size. Larger than a Mora perhaps, but still well proportioned. The grip is rubberised and very positive. This isn’t a knife that will slip out of your hand under hard use. It’s also drilled so you can more securely lash it to a stick and make a spear. 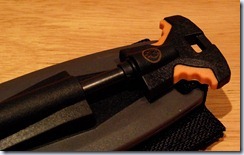 The Fire steel included in the sheath body works well and  is capable of starting fire in tinder (tested). In fact, It felt slightly more effective than my ‘light my fire’ fire steel, although that could be down to inconsistencies in the tinder I used. It also has a little rubber seal to keep out any sideways rain.

The sheath is well made, and has several features of it’s own. It can be threaded onto a belt or on a strap that runs vertically. The knife itself is held in place with a Velcro strap and a clip on the knife guard, which strengthens what I’m calling the ‘tactical’ feel of the knife. Yet again though, this is a useful feature, reducing the chance of losing the knife and making a more positive ‘home’ feeling when drawn or sheathed. When another Velcro strap further down is undone the blade guard flips over, revealing a sharpening stone on the back. 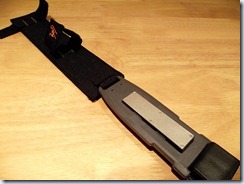 This brings me to a minor, but annoying niggle. The blade wasn’t that sharp when I got it, meaning I had to pull out the water stones to sort it out.. Happily for the purpose of the review this meant I could attack it with the stone on the sheath first to see if it is up to the job.

This is not a fine grit stone for getting a fine finish to the blade. It will however repair a damaged, blunted or nicked blade to a useable level out in the wild. It’s a steel plate with diamond finish, rather than a stone, meaning it’ll be pretty much impossible to break.. (After I’d used the stone in the sheath, I used my own water stones and the blade did sharpen enough to shave hairs off my arm, so another tick in another box). 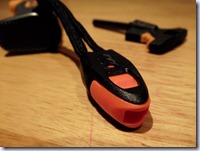 I’m not keen on the whistle on the short lanyard on the handle. I know this is most likely to be the only piece of kit I may have to use here in the UK if things did go wrong, but it feels like an afterthought and always seemed to be in my way. The cord is also not long enough so that it could be slipped around the wrist to prevent the knife being dropped, which is one of the main reasons for a rear lanyard. Although this could easily be cut off (and reattached elsewhere), I’m not that comfortable bringing an unsheathed knife to my face when I’m in trouble.. If I’m dazed, hypothermic and shivering or panicking, this could cause an accident. 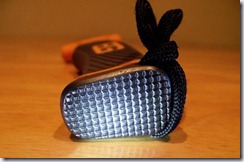 Finally, that leaves the ‘hammer’ in the pommel or butt of the knife.. There are disturbing reports on the net that this can be smashed off.. Gerber states this problem was limited to early runs of the knife and has now rectified this, but it’s worth being aware to stay clear of older stock, or only use this part of the knife if needed – you wouldn’t use your normal knife as a hammer.. Right?

I started to realise that I’d been looking at this knife all wrong. The clue is in the title. Although it may make you laugh at first with it’s pomposity, It’s a knife designed to save your life, to be used in extreme situations, but for a price a normal person can afford. If I really was stranded a ’la Bear in the Patagonian mountains, this would excel. I can’t think of anything else that covers so many situations or eventualities, but still performs each function in a useable way.

I like this knife. It snuck up on me and surprised me at my most cynical. It ticks every box for a remote wild camp and even looks good to boot.

Is the £62 price tag justified though? Well.. Yes.

Considering you get the fire steel and sharpener, then it may not be a bargain – but it is value for money. 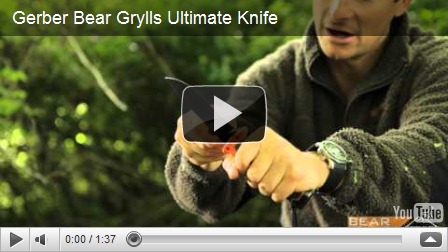