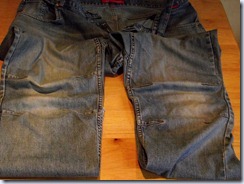 It is with sadness I have to mark the passing of one of my all time, most used bit’s of kit: Alpkit’s Jeanius Jeans.

This amazing piece of kit was misunderstood from the start. They were intended to be water resistant jeans for climbers. Soon there were stories of ‘waterproof jeans’ but they never were meant to be fully waterproof.

When new, water would bead and run off and the jeans would stay dry – for a while. In heavy rain though, they’d eventually wet out. The waterproofing in the material also eventually washed out or wore off (what ever happened, they stopped being waterproof). They were also sweaty compared to normal jeans, that silicon coating on the fibres allowed the fabric to be breathable, but not as much as a normal pair of jeans. Although they kept out the wind well, I always thought it felt like the treatment had left the fabric more conductive to the cold.

People started to turn away, feeling let down by all the hype (that Alpkit had not created, but didn’t do much to dispel). My pair beaded for about 3 months, didn’t get too wet for about 9 months and then (and up till they died) they just dried much, much faster than ‘normal’ jeans. (Mine once got soaked while on the tops, by the time I was back down, they were dry again!).

Why did I love them so?

They dried very quickly.. That meant they were a feasible alternative for normal walking trousers. They were stretchy (remember – they were designed for climbers) and they wore incredibly well.

These are the only pair of jeans I’ve had, that haven’t worn through on the knee’s. I have worn these jeans on a pretty much daily basis for the last 2 1/2 years. They have been over top of kinder (thigh deep in peat), Scrambled up rocks in them, they’ve been in the sea, full of sand, in the snow, in the sun, lounged in, wet, dry, up, down, left and right. They have been with me like a favourite jacket, or a wallet.

I am, as you guessed, very attached to these.. They have lost a little colour along the way, there’s a small hole in that little pocket that never gets used. But they still fitted, did not lose their shape and most of the stitching is still binding everything tight.

So.. what went wrong? The button on the button fly has fallen off, meaning I now look like I’ve permanently forgotten to fasten them.. 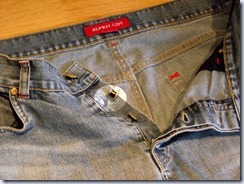 I note that the Alpkit website no longer lists these as an item. There was some talk a while ago of these being re-launched. For the moment though, there’s no news as to whether they will make a comeback (I presume Alpkit are busy trying to perfect their new tent range at the moment).

So here’s a glass raised to a misunderstood but excellent piece of kit, Alpkit’s Jeanius Jeans!