Hello my friends. I've recently been away to a place called Malham. If you've never heard of it.. Shame on you. It was once the site of a colossal waterfall that dried up a long time ago, leaving a huge cliff facing out over a huge valley. I've wanted to go here for a long time, but something else always presented itself.
I got the call recently from my mate Jim, something along the lines of: I fancy going for a hike.. Any Ideas?
Of course I had Ideas, but this was the favorite from the off...
Camping in Gordale Scar, walking up the 'scar', to Malham Tarn and back down to Malham Cove.. It sounded simple and this time, It was.
In fact, although we covered a good few miles, It was pleasant, and beautiful (and the pub had cracking beer).

The campsite is nestled under the scar itself and the owner has.. Lets say - peculiarities. A brief conversation with him in morning went Me:"You're lucky to live somewhere so beautiful" Site owner: "So people tell me"....
What!!??? It is also not somewhere to go if you like your amenities. The toilets are.. Functional. There is a pot washing room and that's about it.
There is a shower in the pot washing room, but I'm not sure how long I'd have to be camped out before you could convince me to use it..
But! the site itself is in the most stunning location you could ever ask for.. 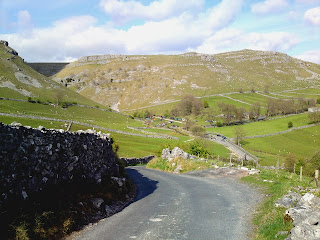 The Scar Itself is caused by a combination or erosion, glaciation and quarrying.
If you go, the path goes straight through the middle of the campsite, then there's a sharp right turn into the scar itself. Inside it is stunning. A huge open cavern with a magical waterfall at the end. 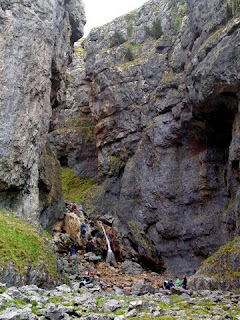 After you climb and scramble up the back of the scar, next to the waterfall. You come out onto a multitude of grassy, extinct riverbeds. If you've ever been to the beach (and I'm sure you have) and if that beach had a small stream on it, you'll know what I'm talking about.. When the stream runs over the sand, It cuts lots of channels that criss-cross over each other.. It's like that but the sides of the stream beds were higher than me and wider than a house... These eventually peter out and you find yourself next to a road.

At this point, I must mention that on this trip, I broke a cardinal rule. I took no map. To be honest, I couldn't afford to go away and buy a new map, so I took my GPS so that, if we did get lost I could backtrack back to the site, with nothing more than a bruised ego. I needn't have worried, On a clear day, with a compass and someone who is confident in it's use, you'd probably never need a map. Maybe not even the compass.. I only used it to take a back bearing as a double redundancy for the GPS.. (DISCLAIMER: NEVER GO WITHOUT A MAP - I DID IT BECAUSE I'M STUPID AND BECAUSE I'M BROKE - NEVER TAKE RISKS WITH YOUR SAFETY).
If you find the road (which is on the OS map) it is pretty much impossible to miss the tarn. There are multiple paths and they all seemed to take you to Malham Tarn.. Now please let me inform you, Unless you have a big things for lakes, this one is pretty unremarkable. Its big, wet and somewhere pretty. It kinda reminded me of a large park near Gatwick. It was however, a great place to stop for lunch.
While we ate, facing away from the tarn, using a wall as a windbreak we were pretty much alone. (watch where you sit though - I nearly plonked myself down on a cowpat tucked right under the wall)
We followed the edge of the Tarn down to where the stream came out, and followed this to a place labelled 'Shake Holes'. This is where the stream goes underground. This is also where things get a bit bizarre.. When there was enough water running over the surface to the waterfall, things make sense. But! when the water goes underground, it gets lost and goes somewhere completely different. (the water coming out at Malham Cove, which everyone assumes is from the tarn, comes from somewhere else, quite some way away). At Shake Holes, the water goes underground. It seeps in so gently that it just slowly peters out, until there is a dry river bed. (incidentally, the last time water made it over the cliff was in the 1800's). The we had a nice surprise. While we were walking leisurely down the river bed, we started passing people on their way up. lots seemed tired and hot.. Jim remarked that the whole walk had seemed to be downhill all the way.. Mostly it is. With the exception of the climb and scramble up the scar, everything else was as good as flat. even the fall of the dried up stream beds from there to the tarn was so gentle you didn't notice). we wondered why everyone seemed so, well, hot and bothered.
It soon became apparent. on this side the river had cut a narrow path, that was beautiful , but full of still air. this lead into an almost straight glacial valley. Like nothing I'd seen before, it was as if a Deity had just pressed his finger into the ground and drawn a groove into the dirt.. 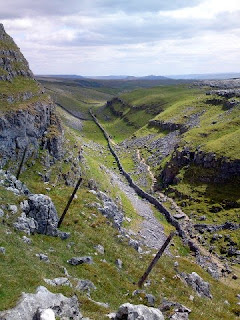 We stopped about halfway down here, just meaning to have a smoke, but it was so quiet, pretty, sheltered, warm and comfy. We stayed over half an hour. But there was no rush on this trip. The tent was already up, and it was still early in the day.

When we set off again, we soon covered the ground to the top of the cliff around the cove itself, peering over the edge and taking pictures Enjoying the distant horizon the elevation afforded us.

From there we walked the famous limestone pavement, Its deep cracks and wobbly blocks making for an interesting walk. In snow or even the wet, it'd be easy to snap an ankle up there. 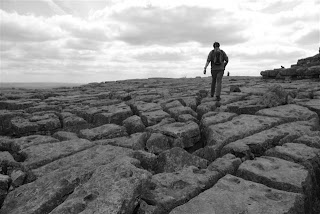 This lead to the stepped path at the far end of the cove. (which is part of the pennine way. It runs right up from malham, up the valley, past the tarn and on from there). Down the steps we went, Jim still amazed we were still headed down hill. We backtracked at the bottom and went to watch the climbers for a while. Sadly the stream in the bottom was quite low (If you are ever here, a good conversational point: this is the source of the river Aire).

Feeling good and only slightly footsore (NB. I'm not going to walk in just one pair of socks again. I've tried it a couple of times now, and each time I've come close to getting blisters). We followed the stream and found a cracking pub called 'The Lister Arms'. Try the 'Nutty Black' It's a very easily drunk ale, but it's also a session beer, so several pints won't send you walking into lamposts.

So - a great place and a cracking walk. If  you set off from Gordale Scar it also seems downhill all the way, once you've got up the first bit. Oh, And before I forget, make sure you search out Janet's foss too. It's quite pretty.