A quick trip to Kinder.

A couple of weeks ago my good lady was going to her parents for the day and instead of taking me, she asked if I wanted to go out walking..
Not needing to be asked twice, I gave my sister a call to see if she wanted to go for a walk. She was happy to go out, but was wasn't keen about going up Kinder.
You see when my mum was young, she had gone up Kinder and she had hated every minute.. She had inadvertantly filled my sisters head with visions of a dready (wo)man-eating-bog trudge that should be avoided at all costs.

I eventually talked her round (but I'd trimmed the trip down to a simple scramble up Crowden Clough, around the edge of Kinder to avoid the boggy ground and down Jacobs ladder.

Setting off she put on a brave face 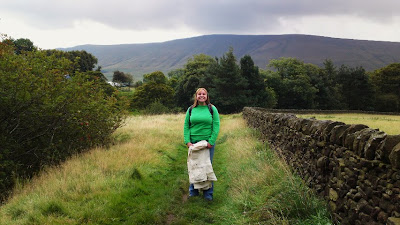 Soon after she settle in and was having fun. We'd talked on the way and she'd reminiced about the fun she'd had doing her DoE. She had been over the great ridge, but not on Kinder before. As we passed into the bottom of the Clough itself, a pretty waterfall presented itself to us 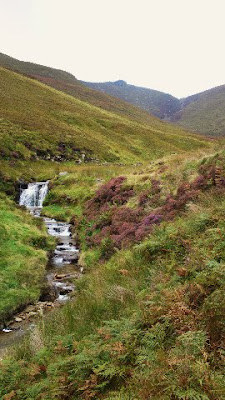 and she came to life, noticing more around her, becoming more animated about her surroundings. We chatted about what she could expect on the top and as the climb became steeper, I slowly built her confidence on the rocks, crossing the stream more than was needed and going over tricker sections, rather than round them. At one point, Trina said that if it got much more difficult, she'd need to turn back. I helped her build pride in what she had already done, as she had heard the bad stories of kinder and we were soon back on our way. As we neared the top and we came up to the scramble itself, She was ready. With the exception of one section that required something more technical than she had done before, she did brilliantly and once at the top, we followed the stream up the river bed to get a look around, and then followed another fork of the stream to find a sheltered spot to have lunch.
About this point it started to rain a little, but it didn't last long.
We followed the path around the edge of kinder taking in the view 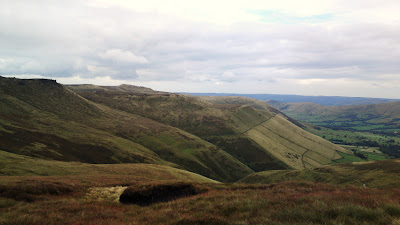 Which is always one of the strong points of kinder. We crossed through the blasted rock formations, and soon came to the head of the path that leads down to Jacobs Ladder.
I always forget just how steep this path is, or at least, appears to be. We carefully picked our way down, passed by a group of mountain bikers going the other way (If this was you, or you have done this - you are mad).
Soon after, we were off the hill and in the Nag's for a quick one before going home.

Did my sister end up enjoying her day out on Kinder? Have a look for yourself. 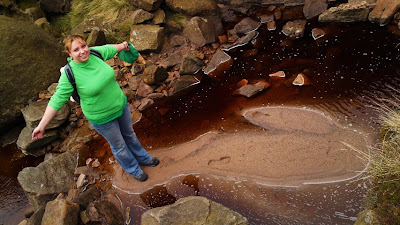