From a big bit of water, to a small one. 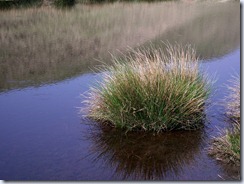 Last Friday I went out with a couple of friends to Alport Castles. I’ve been meaning to get here for some time, not having made it when I was in Alport valley last time.

I’ve been promising to take my boy out for a while as well, so I took ben, my friends and their little girl. To make things easier for them, I cut the route down as much as possible and took a simple way up and off the hill.

When I arrived at Ladybower Reservoir, the water was completely calm, like a mirror. It was cool, but not cold. I had made the decision that I would (hold breath for effect)… Wear trainers and jeans! It was the way to go. The weather forecast was perfect, the weather had been dry for a while and the really peaty bits were paved. 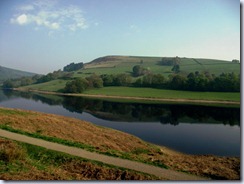 The start is a gravel track that runs from the back of the ‘Bridge end’ car park. It’s quite steep, but was manageable for the kids. It quickly runs up into a picturesque pine wood.

Then, my son started to flag.. I was, to say the least, surprised. This kid never stops. I mean it. He is permanently running around, jumping about and generally creating havoc. Soon he moved from ‘I’m tired’ to ‘I can’t go any further’. We might have covered maybe half a mile. I on the other hand, sit on my ass at work all day, don’t get out anywhere as often as I’d like and I’m full of cold. What was going on?

After some brief cajoling he picked up the pace very slightly and we got underway again with me explaining that when we got out of the forest, the path would get much easier.

When we did get out of the forest, the first thing that struck, was the view. It was outstanding. Clear blue sky on a (now quite hot) spring day. The route followed the top of a field, rutted with land rover tracks. It was not so high that the grass had given way to heather, so it was a lush green carpet for quite some way. The view didn’t seem to change much but as it was spectacular, that didn’t matter much. 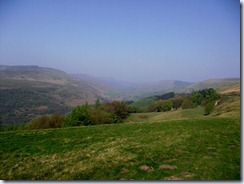 There was a brief moment of drama when My mate’s girl had a bit of a stumble, but after we confirmed the was no damage, just a bit of (dry and therefore brush-off-able) dirt she was fine. This was in the top of some smaller valley. Just after this we had to negotiate an incredibly high ladder stile. 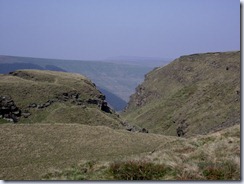 After a fairly a couple of short breaks, we came to Alport castles. From above it’s impressive, then as you walk down the track, you realise just how big this place is. It is HUGE. I knew it was caused by one of the biggest landslides in the UK, but it really is massive. I had already mentally planned a spot for us to stop and eat. There’s a small tarn just west of the tower. What Google Earth didn’t show was that this spot was sheltered and picture perfect.

There are the remains of a fire pit here, so people have been wild camping here. It maybe a great spot, apart from a couple of issues. The ground is currently so parched that any fire could easily start a big wildfire. I’m not convinced that it’d be a good spot for a fire, even when it’s not as dry as it is currently either.

There were a lot of midges. As soon as I sat down, they were zinging around, annoying me. This was in the hottest part of the day, so in the late afternoon, when you’d be thinking about setting up a wild camp, or in the morning, when you’d be trying to pack up, I reckon they’d be very annoying. At least they weren’t the type that liked to bite. 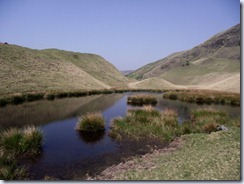 After some food, an Easter egg hunt and some skimming of stones across the water, it was time to start heading back. This was just as beautiful as the way out, although drinking water started to get low, lower and then ran out when we were getting close to the' ‘tallest stile in the area’.. (not verified

) I was still having problems with my son, with him still telling me he was tired, though not as much as on the (uphill) way out.

As we hit the top of the forest track, we stopped and I realised I still had an apple in my bag. Duly split amongst all of us, We wandered back to the car, drove to Ladybower visitor centre, quickly ordered some ice cream and a soft drink. We all sat by the reservoir and a (now sugar’d up) Ben finally perked back up and was running around with gusto again.

Now he confirms he’d love to do it again and I’ve found out why he kept flagging. He’s coming down with a cold as well. 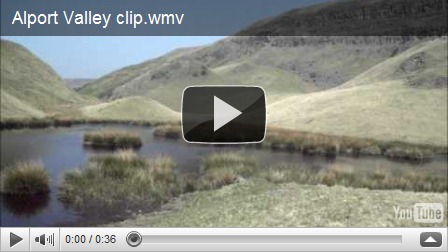