If life is a rollercoaster, I’m a bit de-railed right now..

I’m sat here in the middle of the day with a few moments. I should be at work, but I’ve had to take time off to look after the kids.

One of them is in the hospital and my wife has gone with her.

Now before you all gasp, This is not the first time this has happened. When they were born, they were nearly 2 months premature and the same daughter has been in before. Last time a year ago, she stopped breathing and was rushed in to hospital with child bronchitis.

This time she has Pneumonia and she’s on oxygen.Though the amount that she needs has reduced to the point where she could be coming off this soon..

I hate times like these (of course I do), The feeling of impotence and worry is hard to bear. Especially when I have to be happy for my son and other daughter, who are not old enough to understand what is going on.

I’m sharing this because.. because.. I started this blog as a diary for myself, but started to enjoy sharing my exploits with the rest of you out there. It feels like you are, some kind of extended family now.

Plus It can’t all be the good stuff. If there’s no Bad out there, there’s nothing to measure the Good against.

On another, more random note. If you are a Dr Who fan, enjoy the sneak Peek for the new season. I added this the other day. I had planned to add a post re this, but suddenly other things became more important.

If you are not a fan: Don’t worry, I’ll remove it when the new season starts. I know it’s a bit naff, but it’s one of my guilty pleasures and It’s nice to sit with my son and watch him jump at all the scary bits (though he’s braver than me – I had to watch it from behind the sofa when I was his age!!).

Finally. I’m sure you have heard of PTC* (Peter Macfarlane - Blog writer, Trail contributor and Lightweight proponent)… Well, here’s something I spotted while in the hospital: 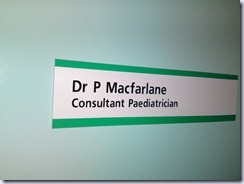