I thought I’d share my experiences with my favourite torches. I’ve used all of these where it counts – out in the hills The only exception is the freebie (more on that later) as I haven’t been walking since I was given it. 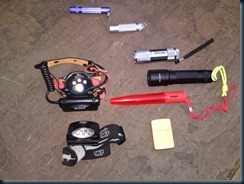 First off, the Maglite Solitaire. This is a torch many of you will be familiar with. It’s very small

and light. It comes in a range of colours and only uses 1x AAA.  There is a spare bulb in the bottom under the battery spring. This is the only torch that does not use LED technology. The Maglite is the dimmest on test. This is the torch of choice for going to the loo in the middle of the night when on a campsite, as the glare won’t wake everyone else on the site up. Battery life is poor as it uses conventional bulbs.

Next comes the impressive LED Lenser V2 key ring torch. This is a little larger than the Maglite and also

heavier, but it ooze’s quality. The cross hatched grip is perfectly cut, the LED has a silvered mirror wrapped lovingly around it. It’s much nicer to use than the the Maglite and would be adequate as your primary source of light but for the fact that it uses LR44 watch batteries (AG13 for our American friends). Although the batteries do last a long time, for this reason, I’m not sure I’d choose this for the hill. I have carried it as a backup before.

A bit of a surprise next. This is a torch given to me recently by someone who works for Volvo fleet sales. 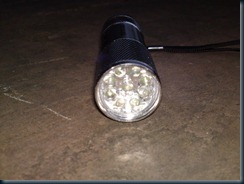 I’ve mentioned it as it as although it doesn’t look like much, It  has impressed me with just how good it actually is for a freebie, Many of the features are copied from far more expensive torches. It’s made from light alloy, has 9x LED bulbs providing a good beam. The batteries are 3x AAA in a magazine inside the torch.. It is a bit rough and ready. I'm not sure that it’s waterproof, though the lens cover could have a little silicon around the edge and around the on/off switch at the back to waterproof it.. Then I’d be happy to take this into the hills. This was going to be added to the car glove box, but my son swiftly decided it was his. If your local Volvo fleet sales guy can get you one, take it.

The LED Lenser Police Tech Focus (Long name!) is the brightest torch I currently use. You can focus or

spread the beam like a Maglite. On it’s first outing it totally embarrassed my mates MASSIVE Maglite (the one that takes ‘D’ cells). It is lots smaller, much brighter and far lighter. This is one of my favourite torches. It takes 3x AAA, and runs on those for ages. It’s also over engineered to the same degree as the V2. The bulb is one single high power LED. This torch feels indestructible. The on/off switch can also be adjusted for perfect balance between flash and on/off. It is however the most expensive here costing around £40

The Energiser glow stick is supposed to be a bit of fun. I found this in the local supermarket, it’s designed for clubbers and children. It didn’t take long to realise it’s the perfect nightlight for ben, It’s great for marking your tent, It’s also good for use inside the tent when your camp site requires lots of stealth.

It takes LR44 (I think) and has a single red LED inside. It just twists on/off. The only downside is that it looks like something you might find hidden at the back of a lady’s sock drawer..

Next is the Alpkit Gamma. This is what I use when I’m walking in the hills at night. It’s so much easier than 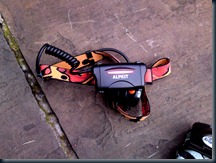 carrying a hand torch, It’s bright, but not as bright as the Police Tech. It uses 3x AAA.

It has several lighting modes, Main beam (which is slightly too narrow for my liking), A dimmed main beam (achieved by (very) rapidly switching the beam on and off. This mode annoys me slightly but I notice flickering things, no-one I know has noticed this). It also flashes as an emergency beacon. There are 3x smaller LED’s. White: a dimmer, lower consumption bulb. Red: to preserve night vision. Green: to preserve night vision and allow the contours on a map to stand out (red makes them hard to see or disappear - if you didn’t know).

There is also a ‘bar’ on the back (see pic, above right) that can be set ‘on’ or ‘flashing’ so if you are on the road the cars can see you from further away. There are 3 straps (one removable for over the top of your head) but I didn’t like this and as I don’t run/bike in this, I just took it off.

This torch is not only feature packed, but is very well priced (currently £12.50).

Sadly, as with all head torches, it makes you look like a berk, so I won’t use this on a campsite unless I’ve hiked in.

Lastly is the Decathlon Geonaute head torch. This takes 3x AAA batteries, has 3x LED inside the case (batteries at the front, unlike the Alpkit Gamma). The torch sometimes has an annoying habit of slowly rotating towards the floor ( I think this is related to how vital the task is), but you can unclip it from the headband and attach another clip. This allows you to clip it to anything handy (a jacket, the side of a tent/door etc.) which is a nice feature. It is reasonably bright and was used before I bought the Gamma. The spread of light is also better than the Gamma. Cost Was around £10 (This range does not currently show on Decathlon’s website). Good for tent lighting or kids, but not much else. 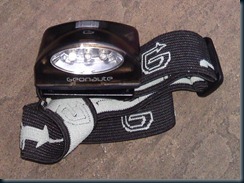