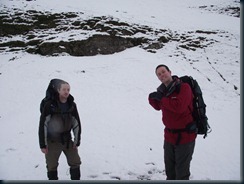 It’s dark and a couple of hours before dawn. As I roll over I notice there’s a cold spot where my feet are.. I shuffle wondering if rain has somehow found It’s way into the tent. While I’m considering why there’s a chill down by my feet, a wave of nausea washes over me. I lie still, trying not to move my left knee, close my eye’s again and try to drop off as quickly as possible. This is going to be painful in the morning..

This is my most eagerly awaited weekend since Christmas. The first camp of the year. Over the last few years, I’ve been spoilt. Calm, clear, cold and snowy. Every single one a beauty. This year was shaping up to be similar, but at the last minute the weather bods can’t make up their minds. Heavy rain, snow, gale force winds, sun.. All were possibilities get thrown at me the week before I leave. The night before I set off, It starts to Hail just before I go to bed.

My mate Jim turns up in the morning and we caught up in the kitchen, having a brew with my good lady, swapping Xmas gifts because we haven’t seen each other for months, discussing whether the weather is going to turn. Paul texts in saying the snow is still falling in Sheffield centre, but he also thinks we’re good to go. The last chance to ditch heavy packs and switch to a car camp with a big tent passes and Jim fiddles with his straps while I kiss the kids bye for the next 24 hours. We set off towards the bus stop when I realise I’ve forgotten something vital.. My Fags.

As we turn round I have a foreboding this camp just isn’t going to go as smoothly as the ones in the past.

When our bus rolls into Sheffield station, We have less than four minutes to get to the right stop to meet Paul. While I visit the smallest room, Jim asks the info desk where the bus leaves from. We dodge out to the other side of the Station and we can see Paul bobbing gently with impatience while he convinces the driver, that yes, we are here and he can see us just over there. Never again will I trust that a route planner from the bus company will allow enough time for transfers.

Castleton, is as it always is. Small, large, pretty, beautified honey pot that draws all kinds. Though on this cold, wet, snowy Saturday lunchtime there are few sight-seers. Just a couple of locals and a couple who asked directions to the YHA (so – people are still using them). As we walk from the station, working out the kinks in our legs and having a pleasant smoke, I notice that although the tops of the peaks themselves are in the cloud bottoms, most of the hill is visible. I managed to think all this, get my Etrex GPS on and the route to follow loaded. It’s time to leave the town behind.

The entrance to cave dale Is a narrow passage between two houses. You’ll walk past it If you're not looking for it. As you walk into it, it suddenly opens into a small valley, with Peveril castle peering over the edge. 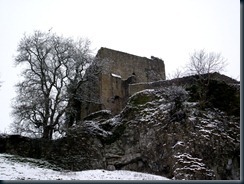 The valley is much steeper than I expected. I thought it would be a nice gentle way up the hill. It’s not STEEP but it’s enough so that by the time we near the top, we have to stop and strip down a layer. We have a pasty and I take off my fleece, meaning that Paul and I are now just in our Base layers and waterproof jackets. It may not have seemed so bad, were it not for the fact that the mist now thickens, meaning the whole world becomes uniform white. It was like one of these 1950’s visions of heaven. Let me tell you. Heaven it ain’t. (The view never got better than on the video you can see on the post before this one). As we head up towards Mam Tor, I notice my heel is feeling hot. Predictably, no one had any plasters, so I re-lace the boot and carry on. By the time we’re level with Mam Tor car park, my heel is on fire. I pulled out the pole I’d brought in case Grindsbrook was iced up and lean heavily on it. As we work up onto the opposite side of the road from Mam Tor, heading towards Rushup edge I manage to twist my knee on my other leg which means both legs now hurt. We push on along the top and thankfully my heel begins to ease off on the flatter sections.

As we cross a Stile, Jim’s phone chimes. This means we have a phone signal. We stop for a bar of chocolate, a sneaky tot of rum and a quick call home to reassure Shani that we aren’t dead. Paul confides he’s happy we’d stopped because he’s getting shooting pains in his thighs.

That was it. With me hobbling along we might have been ok, but if Pauls leg gets any worse the combination could mean we end up stranded, or worse - have the indignity of having to be brought down off the hill.. That’s not happening if I can help it.

I make the decision that we will come down at Chapel Gate, instead of continuing round over brown knoll and down Grindsbrook. We make great time across the top and we’re heading down the valley sides in no time. As we start down, the snow breaks a little and we see the brown of the peat underneath. It’s weird how much you can miss colour.

Darkness falls just as we reach the valley floor and we pick up the road at Barber Booth.

I’m sad that we have cut it short, but I know it’s the right choice, especially given my knee, which had worsened while going down into the valley, now seems to have a metal bar in the joint. Now all there is to do is to cover the last mile or so, pitch the tent and get to the pub! 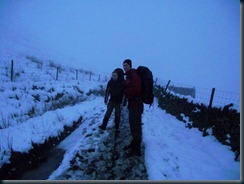 Arriving at Fieldhead campsite I mention that it is much busier on the hills and on the site than in the last few years. While I wonder why this is, we’re struck with another mini catastrophe. Paul has forgotten his sleep mat..

I give him a pair of waterproof trousers and a sit mat he can put under him with the rest of his stuff he’ s going to use to try and help keep him off the floor. Thus braced, we set off for the pub.

Now, I’m sure you’ve noticed, but the result of cutting short the route means that we are in Edale much earlier than we’d expected to be.

The pub was busy, the beer was flowing and the food was hot. Pretty soon we had lost pretty much all judgement, to the point that we started to play drinking games.

I have a video I took of us. I won’t be sharing it, but lets just say, it’s not pretty. 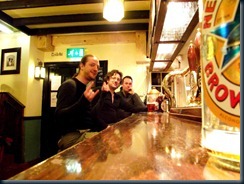 When the Nags throws everyone out we headed back to the tents. in our stupor, it’s decided that a mug of tea is be a capital idea. Finally Jim lets the side down – he hasn’t brought a mug! I brew in the pot and use the lid as a cup, with Jim using the pan side – which isn’t easy to do without burning your lips. this turns out to be just what we wanted, so we make another before we retire for the evening.

And this is where we started. I’ve got a damp patch near my feet (which turns out to be condensation), my knee is agony to move and though I’m plastered, I’m starting to sober up. Definitely not the best part of a night.

But the worst part?

Paul has to get home to meet his parents, so the slow recovery, followed by a train out of Edale around lunch is replaced with a lurching, headache of a re-pack dashing for a train well before I’m ready too.. Even now, while writing this, the memory is fresh enough to make me feel wretched again.

And so for the moral of the story?.. Remember to pack your mug…. you might burn your lips otherwise