Something to entertain you better with..

I’ve been hankering for a new camera recently and I’ve settled on the Fuji Finepix S1900. It was a long drawn out process, with the other contenders being the Panasonic Lumix TZ8 and Canon Powershot SX130 IS.

The Fuji won out because it offers the most features, will accept AA batteries and has one hell of a zoom (18x)! (that and it was considerably cheaper)

I’ve not had much chance to use it yet, but I've taken a couple of images this evening, just to try it out. Below is an 8 second long exposure, (most of Orion is visible at the bottom of the image) 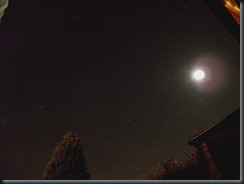 My old camera (an Olympus point and shoot) died months ago (it would no longer focus), so It was time to get an new way of taking images, other than with my phone. It’s going to be a bit of a baptism of fire, taking a camera capable of manual control with me on my next walk but there’s an auto setting if things go pair shaped.

The other reason I wanted to get a ‘proper’ camera over my phone cam is I want to start adding short video clips to the blog (the camera in the phone was poor when it came to video).

The Fuji can film in 720p, so it looks great and that huge zoom can be used while filming as well.

I’ll keep you posted on how I get on with it.